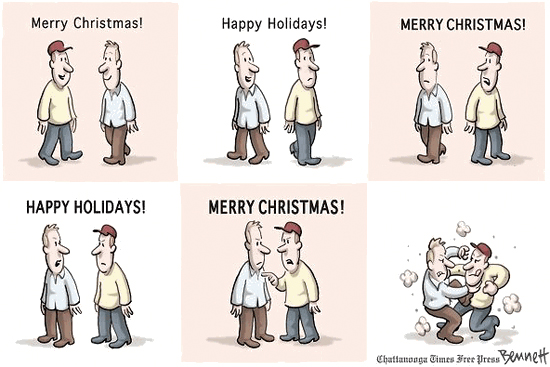 A reader writing a letter to the editor in my daily paper described an incident in which he went shopping, filled his basket with items totaling about $300 and then walked out of the store without completing his purchases.

What prompted him to do that?

When he entered the check-out line and said “Merry Christmas,” the cashier responded with the greeting “Happy Holidays.”

The offended customer goes on in his letter to make it clear that for him, the greetings “Merry Christmas” and “Happy Holidays” have become shibboleths: passwords for telling friend from foe.

shibboleth 1382, the Hebrew word shibboleth “flood, stream,” also “ear of corn,” in Judges xii:4-6. It was the password used by the Gileadites to distinguish their own men from fleeing Ephraimites, because Ephraimites could not pronounce the -sh- sound…A similar test-word was cicera “chick pease,” used by the Italians to identify the French (who could not pronounce it correctly) during the massacre called the Sicilian Vespers (1282). — (Online Etymology Dictionary)

I can understand the cashier’s bewilderment because I had a similar experience last December. A man came to make a repair at my house. He was a very pleasant man and I felt grateful and friendly toward him so, as he left, I warmly wished him “Happy Holidays.” He responded as if I’d slapped him. He drew himself up to full height, fixed me with a stern expression, and said, without a trace of merriment in his voice, “Merry Christmas!”

My own bewildered reaction is probably typical of others when their innocent greeting is met with this sort of implied reprimand, this presumption on the part of the Merry-Christmas greeter that the Happy-Holidays greeter wants, as the afore-mentioned letter-writer has it, “to remove Christ in all things…to change the Christmas season to the holiday season.”

What belligerent nonsense! I belong to Christian culture. For me, a nativity scene is an essential feature of decorating for Christmas. My favorite Christmas cards are the ones that picture Baby Jesus in the manger and angels singing on high. When I wished the man “Happy Holidays,” I was not thinking of Chanukah or Bodhi Day or Winter Solstice or any other winter religious festival. I was thinking of Christmas and New Year’s Eve, the holidays that have always dominated the month of December in my life.

We’ve come to a bad pass in this country when people celebrating the birth of Christ think they’re behaving righteously when they slap down their neighbors for extending friendly greetings with the “wrong” words.

By the way, the English word holiday originally meant “holy day” and referred to a consecrated day or religious festival. In time, the combined form holyday became holiday.

In modern usage, the word holiday includes secular celebrations, but there’s no reason that the assertively religious can’t still find it appropriate as a religious greeting.