I just read the following in a meme on Facebook:

Contrary to what the joke implies, spellings aren’t invented by individuals, and not all English speakers drop the first r in February or the first d in Wednesday.

However, in the case of February, the English spelling has been affected by human tinkering. 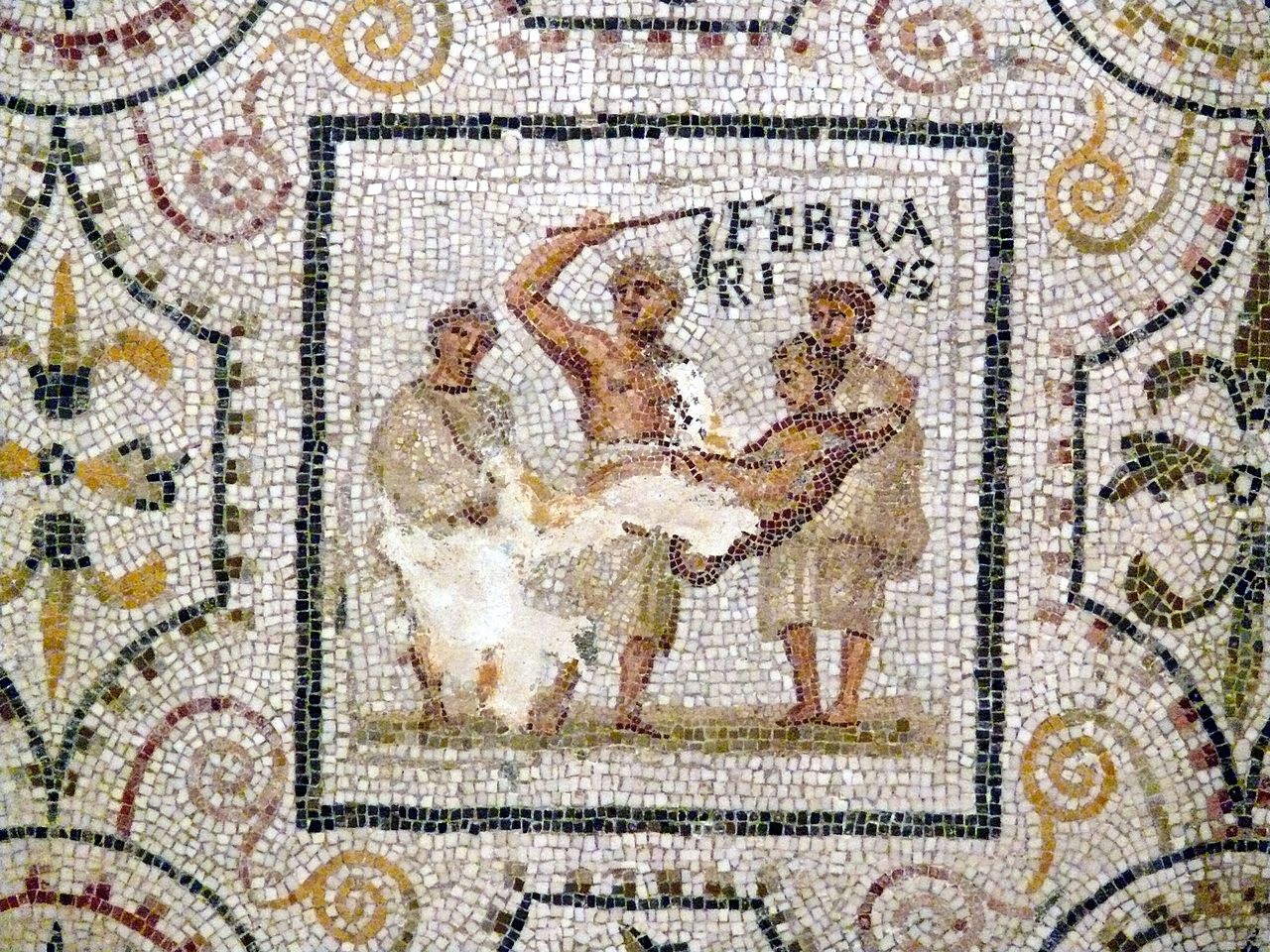 Panel from the third-century mosaic of the months at El-Djem, Tunisia, Roman Africa

The name we attach to the second month in our calendar is from the Latin verb februare, “to purify.” A month in the Roman calendar acquired the name Febrarius (also Februarius)  because of a purification ceremony held during it.

Because of sound shifts, the word februarius came into some European languages with the original b, but into others with a v instead.

Latin februarius became feverier in Old French, the source of many English words. Early texts in Old English show both b and v versions of the word, but in Middle English (the form of English spoken and written from 1150 to about 1470) the spelling was feverer.

Then came the tinkering.

English spelling has long been the target of contempt and efforts at reform.

As early as the fourteenth century, scholars steeped in Greek and Latin looked at English words that could trace their origins to the classical languages and viewed them as “corrupted.” They set themselves to “restoring” what they felt to be more appropriate spellings. Because most of the spellings they “improved” represented established English pronunciation, the scholars’ well intentioned efforts had unintended consequences.

The usual effect of the scholarly changes was to alter the pronunciation of the word. For example, our word perfect was spelled parfit by Chaucer: “He was a veray parfit gentil knight.” The c was added to show the word’s derivation from Latin perfectio. In time, the new spelling produced a new pronunciation. Parfit become perfect, in speech as well as in writing.

In at least one instance, however, an established pronunciation held its own through the centuries: the legal term indict.

Indict came into English as endite and was later spelled indite. Then, in the sixteenth century, learned tinkerers introduced a c to reflect the word’s derivation from the Latin verb indictare. The new spelling won on the page, but English speakers continue to pronounce indict as /in-dite/.

As for the modern pronunciation of February, most US English speakers say the first two syllables as /feb-yoo/, but speakers of British English say, /feb-roo/.

Many British speakers do drop the first d in Wednesday, but not all. British actor John Nettles, who plays Detective Barnaby in Midsomer Murders, pronounces Wednesday as /wed-nz-day/.

Moral: The disconnect between the spelling and pronunciation of some English words is not a sinister plot to annoy English speakers. And there is often more than one “right” way to pronounce an English word in Standard English. It all depends upon which Standard one speaks.