Jeopardy Does It Again

The Jeopardy errors continue to accumulate. Here’s a clue from the June 8, 2016 Double Jeopardy category “The Book Book”: 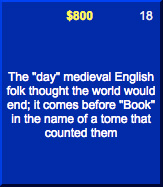 The “day” medieval English folk thought the world would end;
it comes before “Book” in the name of a tome that counted them.

Alex accepted the response “What is the Doomsday Book?” but the clue was one of those made-up “facts” about “medieval folk” that commonly appear on the Web.

There IS “a medieval tome” called “the Doomsday Book,” but whoever wrote the Jeopardy clue hasn’t a clue as to what’s in it.

The Doomsday Book is a tax document. See what the AmericanEnglishDoctor says about it HERE.