Note to Jeopardy: stanch and staunch are different words 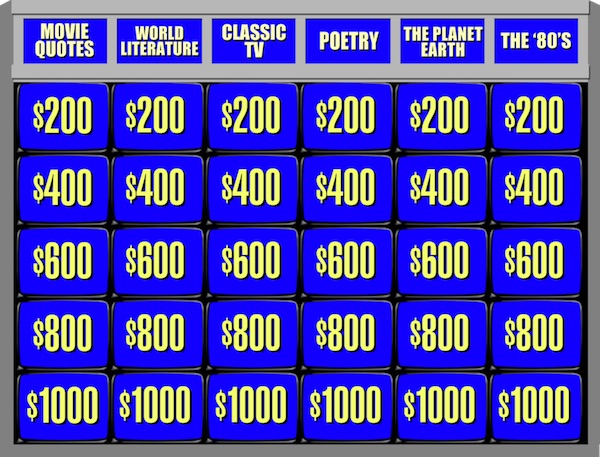 Jeopardy clues are written by a team of nine writers. One of their goals is to ensure there’s only one possible response:

“A member of [the] team first double-sources each fact with reputable sources – usually an encyclopedia, dictionary or other appropriate resource material. If the clue passes that test, the researcher then tries to come up with any possible alternative responses to the clue; if unable to come up with one, the researcher can consider this clue “pinned.” If clues do not pass these double-sourcing or pinning tests, the writers will rework them as necessary until they get approval from the research team.” —Jeopardy site

Even with all this care, some of the clues are misleading , ambiguous, or downright incorrect.

The other day, a Jeopardy clue asked for “a word that, as a verb, means ‘stop the flow’ and as an adjective means ‘strong, firm, true to one’s principles.’ ”

The answer stanch—pronounced by the contestant to rhyme with ranch—was accepted. Had I been a contestant, I would have found the clue ambiguous.

To me, the verb that means “stop the flow” is not spelled the same as the adjective that means “strong, firm, true to one’s principles.” I might pronounce stanch and staunch more or less the same, but I would not spell them the same. They are two different words.

The Jeopardy I watch is a US production aimed at American English speakers. One of the program’s chief references is the Oxford English Dictionary, a British publication. The OED is also my preferred dictionary. However, as my writing is targeted primarily to American readers, when OED recommendations differ from US sources, I usually defer to the latter.

Stanch does occur as an adjective in old books and periodicals (1930 and earlier), but modern usage favors reserving stanch for use as a verb and staunch as an adjective.

As long ago as 1926, British usage expert H.W. Fowler (Modern English Usage) acknowledged a distinction: “The adjective is usually staunch; the verb stanch.”

The American dictionary Merriam-Webster, ever eclectic, accepts a variety of spellings and pronunciations for both stanch and staunch, but the US style books I rely on make a distinction between verb and adjective.

Chicago Manual of Style: “The adjective is usually staunch, the verb stanch.

AP Stylebook: “Staunch is an adjective meaning “ardent and faithful.” Stanch is a verb meaning “to stop the flow”; it is almost always used in regard to bleeding, literally and metaphorically.

Much of the entertainment offered by Jeopardy to its viewers lies in the delight of getting the “right” answer. The stanch/staunch clue doesn’t afford all viewers that delight.